Posted on January 3, 2015 by bcorcoranMHC 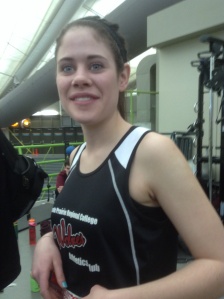 I didn’t have a pic from Indoor Provs, but here’s a picture of Kailey … and it was taken at an indoor meet … close enough! 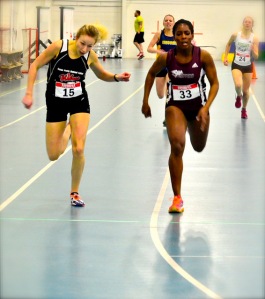 With a silver medal at ACAC’s and a 5th place finish at the 2013 CCAA XC Running Championships , Jamie Wigmore established herself as one of the top college runners in Alberta.  By the end of the 2014 indoor track season, she left no doubt that she was THE TOP women’s distance runner in the ACAC.

At the 2014 ACAC Indoor Championships, Wigmore won 3 individual gold medals (400, 800, and 1500) and anchored the 4 x 400m relay team to a bronze.  Collectively, the Wolves women placed third in team competition.

Sanchez Hollowell also distinguished himself at the ACAC champs with a gold medal performance in the 1500m and a bronze in the 3000m.

So … no picture of Nicole or no picture of a random high jumper. Guess that means that we default to the club logo for this one …

168 athletes of all ages and abilities descended upon the Legion Track on Saturday, May 10 for the 2014 Peace Country Classic/Grande Prairie Hershey Meet.

The day produced a number of memorable performances including a provincial W40-44 record in the high jump.  Club member Nicole VanDerKaaden leaped 1.30m to set the new Alberta standard.

For the second year in a row, WAC athletes took the top prizes in the Daily Herald Tribune Press Run 10 km road race.

Hayden Hollowell defended his 2013 title, winning this year’s race in 35:05, 4.5 minutes ahead of the second place runner.

With defending women’s champion Jamie Wigmore out with an injury,  Mirelle Martens stepped up to represent the mighty WAC.  In her first-ever road race, won the women’s event in just over 41 minutes.  (And a few hours later soloed a 5 minute flat 1500m for good measure … just saying.) 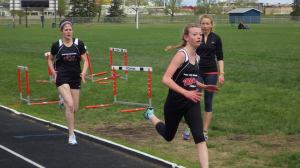 Brit and Kailey, the core of the “Baby Wolves”, raced each other a lot in 2014. Both athletes won multiple titles at the 2014 NW Zone Championships.

Mirelle Martens, Kailey Bratland, and Brittany Duvall combined for a total of 8 wins at the 2014 NW Zone Track and Field Championships in Peace River.

In addition, the trio combined with Kelsey Bishop to win the Open Women’s 4 x 400m in a new Zone record time.

In June 2013, an unknown Mirelle Martens burst on to the provincial scene with a convincing win in the 3000m at the ASAA Provincial High School Track and Field Championships.  A year later, she returned to Provincials, this time as the favorite.

The 18 year old St Joe’s student did not disappoint, winning the Senior Womens 3000m title for the second year in a row.  Martens also placed second in the 1500m, which also duplicated her 2013 result in the event.

Fortunately, for fans of the hirsute (ya, look this one up), Beard 2.0 was re-established almost immediately.  By the end of 2014, Rick’s visage (yep, you may need to look this one up as well) was back to its normal homeostatic state.

Here’s a classic Sanchez shot from 2 years ago when he was 11 seconds slower over 1500m. You can take the boy out of Hythe, but you can’t take Hythe out of the boy.

Mirelle Martens also had a successful outing at outdoor provincials.  She captured her first AA provincial title, winning the Junior Women’s 3000m in 10:31, a personal best time aka her new PR in the event. 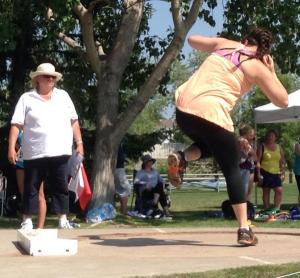 We’re 9 pictures in to this document, so it’s time for a shot of a thrower. You rock, Cianna!

For the record, the NW Zone track team had 7 podium finishes (5 silver and 2 bronze).  The NW Zone was also recognized with the Spirit of the Games Award. 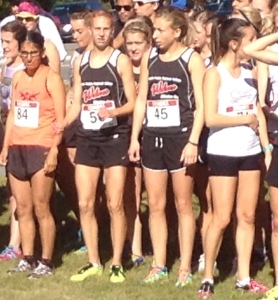 In 2014’s first CCAA XC Running National Rankings, the GPRC Wolves Women’s team was ranked second.  As things turned out, this was the “low point” of their sensational season.

On October 4, the Wolves women took on the defending national champion UBCO Heat and all of the ACAC’s best in Calgary.  By the end of that race, it was clear that the GPRC women were a force to be reckoned with.  The Wolves easily won the meet with a score of 22 points, 13 better than second place Lethbridge College.  UBCO placed third.

In the next CCAA rankings, the Wolves moved to #1 in Canada, a position they maintained for the rest of the season. 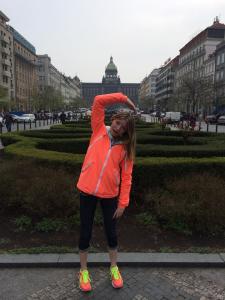 This isn’t an xc picture, but this is Brit, and she’s executing one sweet Bill Wave

After missing the top ten by a single place in 2013, Brittany Duvall redeemed herself with a tenth place finish in the Intermediate Women’s 4 km race in the 2014 ASAA Provincial High School XC Running Championships in Okotoks.

Scads of GPRC fans, including the Wolves Women’s soccer team, made the trip to Calgary on November 8 to watch Big Mir and her team mates crush the field at the CCAA XC Running Championships

Mirelle Martens led the way with a convincing 31 second win for the individual gold medal.  Jamie Wigmore(4th), Jackie Benning (8th), and Amanda Patteson (11th) were the other GPRC scorers.

In 2013 in her third-ever xc running race, Mirelle Martens faced the best runners of her age in the country at the  Athletics Canada National Cross Country Running Championship.  She finished 33rd.

One year later, armed with much more racing experience, Martens was ready.  Running an aggressive race where she stayed among the top five for the entire way, Martens kicked hard over the final 400m and hung on for the bronze medal.