Posted on November 30, 2014 by bcorcorangprc 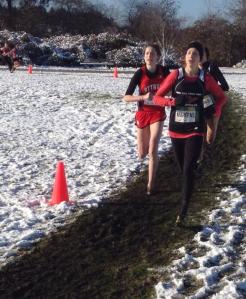 Martens got out to a quick start and ran in the lead pack of four runners for the first two laps  of the three lap race. In the final lap, winner Hannah Woodhouse of Ontario separated herself from the field, and silver medalist Jennie Baragar-Petrash from Winnipeg rallied from 8th place.  Martens dug deep in the final 400m to hold off four other runners in the battle for the bronze medal.