Twenty-eight plus years ago, a young grad student gave up shaving for Lent. But after 40 days and 40 nights, Rick Scott figured he was on a roll and continued his “sacrifice.” On Saturday June 14, however, the razor made its triumphant return, shearing off perhaps the Peace Country’s most iconic beard.

Scott’s date with the shaver was precipitated by a pledge he made to his daughter six years ago. When asked, “When will you shave off your beard?” he replied, “When you graduate from law school.” Oldest daughter The Lovely Sara Scott convocated from the University of Ottawa on Sunday. 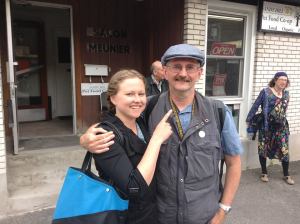 While Scott was unavailable for comment, rumor has it, Beard 2.0 is already in progress.

Like Loading...
This entry was posted in Uncategorized and tagged Beard, Rick Scott, Wolves Athletics Club. Bookmark the permalink.