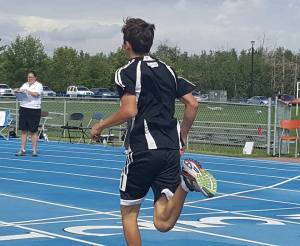 In 1981, when disco was on the way out, Montrose Jr High’s Dean Kildaw established a NW Zone Senior Boys 1500m record which ended up having far more staying power than the collected works of the Bee Gees or the Tramps.

Holy Cross runner Emma Noskey also established a pair of zone standards in the Junior Girls category. Noskey blasted the 400m in 63.9 on Friday and followed up on Saturday with a 26.9 in the 200m.  She also had a second place finish in the 100m.

Other highly notable record performances turned in on the weekend included

In the team standing, Hillside Valleyview edged out Prairie River (High Prairie) for the junior high title.  Harry Balfour was the top GP and area team – they placed fourth.

The top 2 athletes in each senior high event qualified for the ASAA Provincial High School Track and Field Championships next weekend in Edmonton.