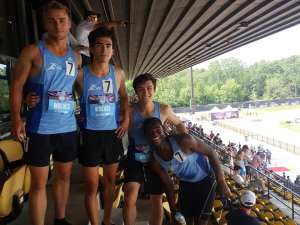 Manz got the team off to a good a start and passed the baton to Tufford, who smoked his first-ever sub 50 second 400m run to move the team in equal second place at the halfway mark.  Macedo and Nelissen battled hard with teams from Ottawa and Calgary over the final two segments of the race; both runners produced personal best times on their legs.  In the end, the team fell just short of the podium,  finishing 1.7 seconds behind the second-place Ottawa Lions, and 1.3 seconds behind the third- place CALTAF team.

Keyana Anderson produced a lifetime best throw of 38.94m and placed sixth in the U20 Discus at the 2019 Athletics Canada Track and Field Nationals

On Friday morning in the U20 Women’s Discus, Sexsmith’s Keyana Anderson went  into the competion ranked 12th of 16 competitors.  In Round 3, she equaled  her personal best throw and moved into sixth place, the position that she would retain. In Round 5, Anderson unleashed a huge throw (38.94m), an improvement of nearly 3m over her previous best set last month.

Ontario’s Trinity Tutti won the Women’s Discus event by over 14 metres, setting a new Canadian U20 record with a toss of 56.95m  in Round 5.

Wolves athletes also took part in a number of other races at the meet:

While Nationals marked the end of the track season for most Peace Country Wolves Athletics Club athletes, Anderson and Beaverlodge’s Kobe Grocholski still have one more meet in their seasons.  Anderson will be part of Team Alberta at the Western Canada Games in Swift Current, SK next month, while Grocholski will compete in the Athletics Canada U18 Legion Nationals in Sydney, NS in two weeks time.