Posted on February 28, 2016 by bcorcorangprc

It took until the awards banquet after the meet had ended, but the GPRC Wolves managed to hit the podium on Saturday at the ACAC Indoor Track Championships in Calgary.

In the always competitive No-Hands-Oreo-Eating-Contest, Josh Malmsten managed a 2nd place finish, while rookie Hannah Caldwell came out of nowhere to nab third place. Based on their combined performance, the Wolves earned the coveted right to eat first at the buffet.

Earlier in the day, the Wolves men finished the meet with 12 points, good for fifth place overall. The Wolves women placed sixth with 8 points. 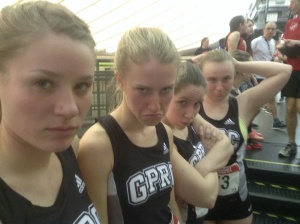 The ACAC meet marked the final competition in a Wolves singlet for graduating runners Kirsten Manz and Emily Whalen. Whalen marked the occasion with a win in Heat 4 of the 300m prelims.

Full results are posted at www.calgarytrackcouncil.com/ACAC2016

Martens won gold in the 3000m and picked up a silver in the 1500m. Manz also had a silver as part of the U of A’s 4 x 800m relay team. Both athletes qualified for CIS Nationals in two weeks.