Posted on September 22, 2019 by bcorcorangprc 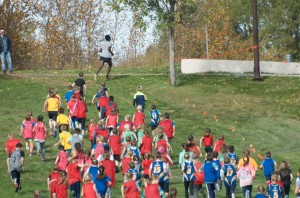 Over 220 runners from across the province convened at Muskoseepi Park on Saturday for the 18th running of the Steve Burgess Memorial XC Running Race.  While Edmonton area athletes took the top places, a number of local runners managed top 10 placings in the featured 6.2 km and 8.25 km races.

Leonard Cheeso from Concordia University of Edmonton (CUE) scorched the field in the men’s 8.25 km race recording a time of 26:18, nearly 3 minutes ahead of second place Micho Green of the University of Alberta – Augustana Campus (UAA).  Local runners Hayden Hollowell and Brandon Wladyko were the next two runners across the finish line. Beaverlodge’s Kobe Grocholski (7th), GPRC’s Chris Nelissen (8th), and Jordan Lundstrom (10th) were the other the Peace Country athletes finishing in the top 10. 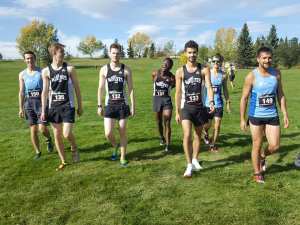 In the men’s team standings, the UAA came out on top.  The Peace Country Wolves Athletics Club (PWAC) was second.

The Steve Burgess race served as a trial run for the 2019 CCAA Nationals XC Running Championship race to be held in Grande Prairie on November 9.  Feedback from the athletes who competed on Saturday indicated that the course was both challenging and interesting.

Full results are posted at the Race Pro Results site.