Posted on February 9, 2019 by bcorcorangprc 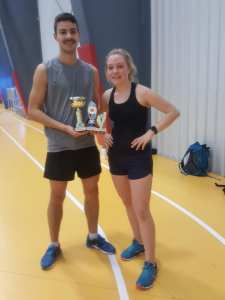 It may have been -39C outside, but the track inside was smoking on Saturday morning at the Crosslink Sportsplex where the 2019 Lydia’s Day Off Invitational was taking place.

Brandon Tufford from the host GPRC Wolves club blasted the fastest 400m ever run in Clairmont, stopping the clock at 57.0.  He was chased the whole way by teammate Joelmanz, who recorded at time of 58.0.

The 2000m saw a fierce 3-way between Miguel Macedo, Brice Wilkes, and the ageless Fabio Minozzo. In the end, Macedo prevailed in a time 6:41.3.

The meet concluded with a controversial 4 x 200m relay.  The top two teams, Wolves International and Wolves Sketchy were disqualified for a variety of questionable infractions.  Wolves Classic, featuring the ultimate classic, Rick Scott, was declared the winner of the relay.

Contrary to what it might look like, the organizers categorically deny the the LDO awards were re-purposed little girl’s highland dancing trophies

Full results of the LDO Invitational are posted here.