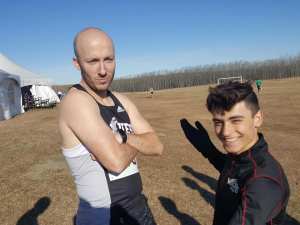 Reynolds, one of only two vets on a rookie-ladden Wolves men squad, has chosen not to accompany his team mates to CCAA Nationals in two weeks time in Toronto.  “It’s time to give some of the young guys a chance to run at Nationals,” said Reynolds.

Overall, Wolves coach Bill Corcoran described the Wolves’ performance on Saturday as “mixed.” “We improved our ACAC women’s ranking from 7th to 6th, and our men held in there at 6th place, but quite frankly, we were hoping for a few spots better,” explained Corcoran. 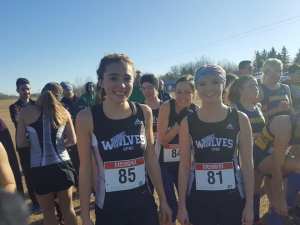 Lethbridge’s Sophia Nowicki won the women’s individual gold medal in a time of 23:53,  25 seconds better than runner up Emily Mann from SAIT.

In the men’s race, Eric Nooy (12th) and Miguel Macedo (18th) were the top Wolves finishers.  Brandon Tufford ran in the top 10 for the first 5 km of the race, but encountered some severe GI issues in the final few kms and faded to 29th place at the finish, one place better than team mate Brice Wilkes.

Both Wolves teams have accepted the ACAC #5 berths for the November 10 2018 CCAA XC Running Nationals in Toronto at Seneca College’s King City Campus.

The Wolves will host the 2019 CCAA XC Running Nationals in Muskoseepi Park next year on the November long weekend.

Full results are posted at the Race Pro Timing website.