Kailey Bratland (38) and Brittany Duvall (193) at the 2.3 km mark of the Senior Women’s 4 km at the 2015 ASAA XC Running Provincials in Grande Prairie

A pair of Beaverlodge Regional High School runners had the top local placings at the 2015 ASAA Cross Country Running Championships hosted at the Wapiti Nordic Ski Trails on Saturday. 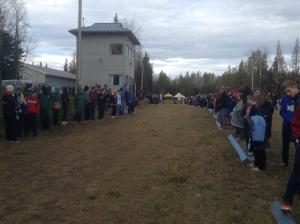 A pair of former Peace Country residents who are now living in Edmonton also distinguished themselves.  Tyson Keddie placed second in the Junior Men’s race while sister Danae Keddie was fourth in the Senior Women’s event.

A total of 739 runners from across the province took part in the event.

Full results are posted on the Results Canada website.