Gold and Silver for Wigmore at AB Indoor Games

Posted on February 16, 2015 by bcorcorangprc 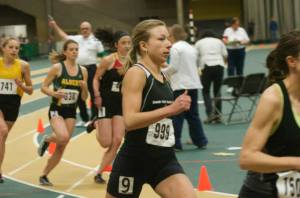 On Sunday, Wigmore placed second in the 1500m behind University of Calgary’s Sarah MacArthur.  The Wolves athlete stopped the clock in another personal best time of 4:40.30, five seconds back of MacArthur.

Both of Wigmore’s performances were new Wolves School records.

Wolves Hayden Hollowell also had a notable meet, breaking the nine minute barrier for the first time in the 3000m.  Hollowell clocked a time of 8:58.39, good for 6th place in the Senior Men’s race.

Wolves runners next see action on Feb. 27 and 28 when they compete in the 2015 ACAC Indoor Track Championships in Edmonton.