X-C Wolves Rocket Up the Rankings at CCAA Nationals

Posted on November 13, 2011 by bcorcorangprc 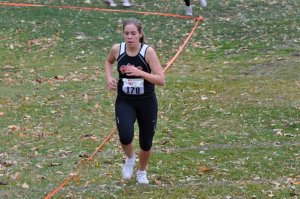 Going into the 2011 CCAA National Cross Country Running Championships in Kamloops on Saturday, both Wolves x-country teams were looking to significantly improve upon on their national rankings.  By the end of the event, that mission had definitely been accomplished.

With 11 finishers, the Wolves women fielded the largest team in the competition,

The race was won by last year’s runner up, Jodi Sanguin of Red Deer College.

A total of 224 athletes from across the country took part in the meet.  Champlain College from Montreal will host next year’s championship.

The CCAA meet marked the end of the x-c season for most of the Wolves; however, Kayla Hardy and high school runner Hayden Hollowell have one more meet this year.  Both athletes will contest the Athletics Canada Junior Nationals Cross Country meet in Vancouver on November 26.