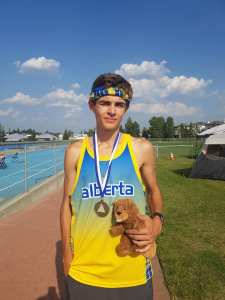 Kobe Grocholski represented Team Alberta well, placing 3rd in the the U18 1500m at the 2018 Tri Province Championships in Sherwood Park

On Saturday afternoon in Sherwood Park at the Western Tri Province Championships, Grocholski parlayed a strong last 300m into a third- place finish in the U18 1500m race, clocking a time of 4:07.07.  His latest triumph comes on the heels of a third-place finishes in last week’s Alberta Summer Games in Grande Prairie and the previous week’s Athletics Alberta U18 Championships meet in Calgary.

Grocholski’s 1500m time eclipsed the standard of 4:08.00 and qualified him for a spot next month’s U18 Nationals in Manitoba.