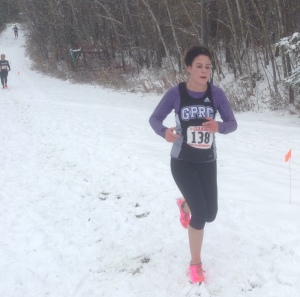 Kailey Bratland battled tough conditions at the 2016 Augustana Open.  She placed 17th amongst the college women.

A quartet of local runners had top 10 finishes in the ACAC #5  – The Augustana Open in Camrose on Saturday.

In the team competition, the GPRC women placed 5th, while the men were 7th

Next up for the GPRC team is the ACAC XC Running Championships at Wapiti Nordic on October 29.

Spirit River Regional Academy’s Eric Nooy placed 26th in the Senior Boys 6 km run.  PWA runner Lydia Steinke was 39th in the Junior Girls 3 km.  A number of other local runners were slated to compete, but poor road conditions on Friday morning prevented them from travelling.