Posted on February 22, 2015 by bcorcorangprc

In a astonishingly poor and arbitrary decision, Amanda Patteson was named the Athlete of the Meet at the 3rd annual Amanda D Hippy Invitational at the Eastlink Centre on Saturday.

Patteson, a 4th year runner from the GPRC Wolves, overcame a number of obstacles (most which were self-inflicted) to record a second place finish in the 1000m (3:14) and a fourth place finish in the 300m (51.8).  She also ran a leg on the victorious GPRC Women’s 4 x 200m relay team which lowered the school record by 1.5 seconds.

Other notable performances were turned in by Jamie Wigmore, who lowered her own Wolves school record in 400m  to 63.0, and Josh Malmstem, who upset team mate Brandon Wladyko in the 1000m. 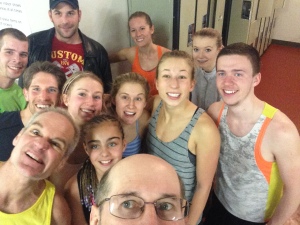 But first, let’s all take a selfie